History of IG Metall
What we have already achieved: Our milestones.

As the world’s biggest single trade union, we have set milestones for the entire Federal Republic.

The history of IG Metall goes back to the establishment of the of the German Metalworkers’ Union in 1891. It was the biggest forerunner organisation of today’s IG Metall.

After the Second World War the trade unions were re-established in West Germany according to the principle of united trade unions. So we, IG Metall, have been fighting together for our objectives since 1949. Since then we have achieved a lot with our active collective bargaining policy.

The 1950s: Shorter working hours and security for workers in the event of illness

Just a few years after being established, IG Metall achieves a gradual reduction in working hours from 48 to 44 – with no loss of wages. In 1957, in the longest strike in the history of the Federal Republic of Germany, we win the continued payment of wages in the event of illness, thus laying the foundations for the equal treatment of blue-collar and white-collar workers. A few months later, the German Federal Parliament passes the „Act for the improvement of the financial security of workers in the event of illness“ – the forerunner of today’s Continuation of Remuneration Act. It still applies to this day for all employees.

The 1960s: A time of upheaval – Large wage increases and more holidays

IG Metall wins wage increases of up to 8.5 per cent almost every year – because the economy is booming and wages and salaries must not be left behind. At the same time, we win the battle for the 8-hour day and the gradual introduction of the 40-hour week with no loss of wages. There is also agreement on the extension of holiday entitlements by 3 to 6 days, and 30% additional holiday pay starts to find its way into collective agreements.

The socially active seventies are once again marked by significant strikes, including in the steel industry. IG Metall secures part of a 13th month’s pay for its members. For the first time we conclude a collective agreement about employee savings schemes, to which are added a staged plan for the 30 days’ holiday still in place today and the increase in holiday pay to 50 per cent. The second half of the seventies is marked in terms of social policy by mass job losses and initial economic crises. The responses by IG Metall to these developments are the agreement on job protection in the event of rationalisation, protection against downgrading and protection against dismissal for older employees.

In 1984, our employees strike for the 35-hour week. The employers counter with „not one minute less than 40 hours“ and there are massive lockouts – over half a million employees at the highpoint. But the solidarity between the strikers and those suffering „hot“ and „cold“ lockouts cannot be broken. After seven weeks’ strike the employers climb down in arbitration. Their dogma is broken and the staged plan for the 35-hour week with no loss of pay is agreed. The staged plan for the extension of the holiday entitlement also reaches its end – the 30 days have now been achieved. 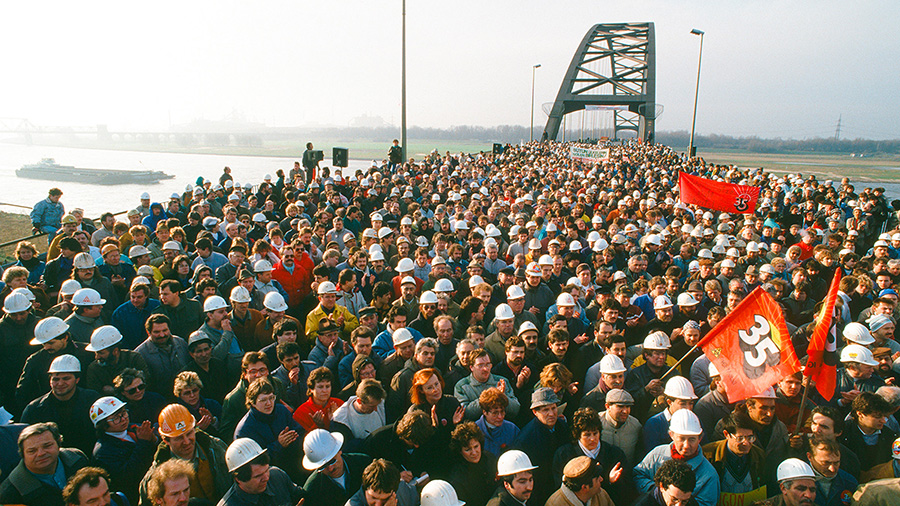 The 1990s: Tariff structures for the new Federal States

IG Metall overcomes the challenges of reunification and establishes trade union and tariff structures in the new Federal States. The implementation of the step-by-step plan for convergence with the tariff level in West Germany proves difficult. Following the illegal termination of the graduated tariff agreement by the employers, IG Metall calls a strike once again. The graduated tariff is reinstated in „extended“ form. In addition, a hardship clause is agreed for companies at risk.

The 2000s are marked by the defence of our wage standards and free collective bargaining. With the remuneration framework agreement, we regulate the job clas-sification for employees again in a more fair and equitable manner. In future, work of equal value will be paid equally.

Known as the „Pforzheim Agreement“, there are collectively agreed flexibility clauses relating to competitiveness and plant safeguarding. In order to finally call a halt to the increasing misuse of temporary work, IG Metall launches its „Equal Work – Equal Pay“ campaign.

The 2010s: Against precarious employment – Equal pay for equal work

In 2012, IG Metall achieves its first collective agreement with the Federal Employers’ Association of Personnel Service Providers and the Association of German Temporary Employment Agencies. For the first time, temporary workers in the metal and electrical industry immediately receive industry bonuses, and after working at the same workplace for 24 months they get a permanent employment contract. Similar arrangements are also subsequently implemented in the woodworking and plastics processing industry, as well as in the textiles and clothing industry.

The world of work is facing some major challenges. Whether it comes to demographic shifts, the ways in which digitalization is changing work and living conditions, or the increasing inequality in society at large, IG Metall always has workers’ interests in mind when addressing each topic.

Our campaign „My Life – My Time: Rethinking Work“ concentrated on the issue of working hours, focusing on aspects such as work-life balance, the loss of working hours and increasing workers’ self-determination. In addition to successes such as the collectively agreed definition of hours for job training and workers on partial retirement, IG Metall introduces clear, concrete issues into the political debate such as family working hours and workers’ right to return to full-time work after having gone part-time.

Together for a good lifeIn good company at IG Metall

Strong through you. Strong for you.Membership contribution: One per cent of gross income